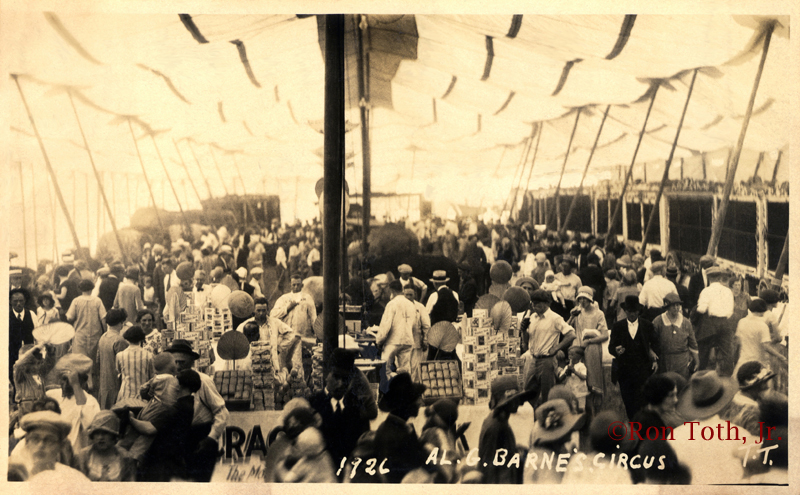 Here is a 1926 photograph of a very busy Cracker Jack concession stand in an Al G. Barnes Circus tent. In the photo Cracker Jack vendors can be seen wearing Cracker Jack jackets. The booth has the usual "Cracker Jack - The More You Eat - The More You Want" slogan banner on the tables. The tables hold various stacks of Cracker Jack boxes, Angelus Marhmallow boxes, other confection packages, perhaps pop corn bricks, and boxes holding bags of roasted circus peanuts. There are also many hand held fans and balloons being displayed for sale or given as a premium. Under the big tent there are also many circus wagons and some circus animals. The photo is the same size as a real photo post card but does not have the printed back. The front reads as follows:

Now this is a scene, WOW!

This was the Menagerie Connection tent between the Big Top and the main Entrance... and it was the "Blow off"(That is when the crowd was exiting)... Why? Because it wasn't the Custom to sell balloons on the "Come In"...they get in the way of people watching the show... too many complaints . Also I should mention Concessions Managers usually sent in Seat Butchers (Vendors) with Dry (Peanuts and cracker jacks and popcorn during the early seating of customers and Wet (Coke and Snowcones) when the show started. CrackerJacks has always been a main staple of Circus Concessions. CrackerJacks supplied Circuses with Concession tents and vendors jackets for many years.
Bob Cox...... (Cristiani Wallace Circus...Clyde Beatty Cole Brothers and various other shows and events.)
Top

Thanks for sharing the photo taken in 1926 Ron. It was a busy day at the circus for sure and fun to see the vendors and circus-goers in action so to speak. Thanks also for the additional info bob in exile!